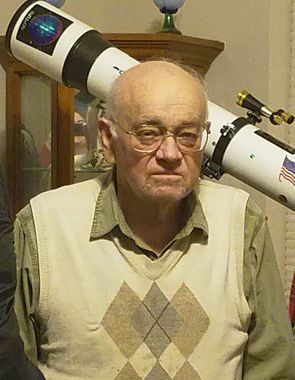 The OSU Physics Department recently lost adjunct professor and good friend, Arthur Lucas. Art and his wife Barbara came to Stillwater in 1995, first working with Steve McKeever and Mark Akselrod. In 1996, he started Stillwater Sciences with Mark Akselrod in order to grow aluminum oxide for Landauer Luxel dosimeters. The company is now the Stillwater Crystal Growth division of Landauer. More recently and up until his death, Art worked in the OSU Radiation Physics Laboratory with Eric Benton on, among other projects, the development of radiation detectors for use aboard spacecraft and aircraft. Art was an expert in the area of radiation detection and a pioneer in the use of thermoluminescence dosimetry, developing the radiation dosimetry system used aboard America’s first nuclear submarines and aircraft carriers. Art played an instrumental role in mentoring many undergraduate and graduate physics students, providing technical help as well as career advice about working in government and industry. Art was also an avid amateur astronomer and space traveler, and personally traveled around the Sun over 91 times.

The department is very saddened to lose such a wise and enthusiastic mentor.  Art Lucas was a wonderful teacher, friend, and colleague.  He will be greatly missed.