Title: Mathematics, Particle Physics and Machine Learning
Abstract: Our knowledge of the fundamental particles of nature and their interactions is summarized by the standard model of particle physics. Mathematically, the theory describes these forces and particles as the dynamics of elegant geometric objects called Lie groups and fiber bundles. Now advancing our understanding in this field has required experiments that operate at higher energies and intensities, which produce extremely large and information-rich data samples. The use of machine-learning techniques is revolutionizing how we interpret these data samples, greatly increasing the discovery potential of present and future experiments. In this talk, I will provide a brief overview of the standard model, and discuss how to search for new physics beyond the standard model with a specific example using neural networks 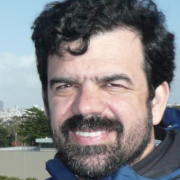 ABSTRACT: The Standard Model is one of the greatest scientific achievements of all time.
It is based on a quantum field theory that includes the electromagnetic interactions, the weak interactions associated with radioactive decays and the strong interactions associated with nuclear forces. It provides an excellent description of all laboratory experiments performed to date. However, there are a few important questions that this theory does not answer. One is why is the Universe composed of matter, with no visible anti-matter component. Another one is the nature of the Dark Matter, known to be necessary to explain the star rotation velocities and the structure of galaxies. There is also the question of how to incorporate (quantum) gravity within this description. Finally, there are a few unnatural features in this model that deserve explanation. Based on past successes, particle physicists today are concentrated on the answer to these fundamental questions. I will provide a review of the status of particle physics and of the ideas and experiments conceived to look for what lies beyond the Standard Model description.

Dr. Carlos Wagner is the head of the Theory Group of the High Energy Physics Division at Argonne National Laboratory. He works as a Professor at the Enrico Fermi Institute and the Kavli Institute for Cosmological Physics at the University of Chicago. His area of research is phenomenology of particle physics, namely the study of the interactions of elementary particles, with a special emphasis on collider physics, Higgs physics, the theory of Dark Matter and the origin of the asymmetry between matter and anti-matter. He held postdoctoral positions at Purdue University, the Max Planck Institute in Munich and at the CERN Laboratory, where he also worked as a staff member between the years 1996 and 2000. Dr. Wagner is a Fellow of the American Physical Society and a recipient of a Humboldt Research Prize.

Argonne National Laboratory
Title: On the Higgs and Dark Matter 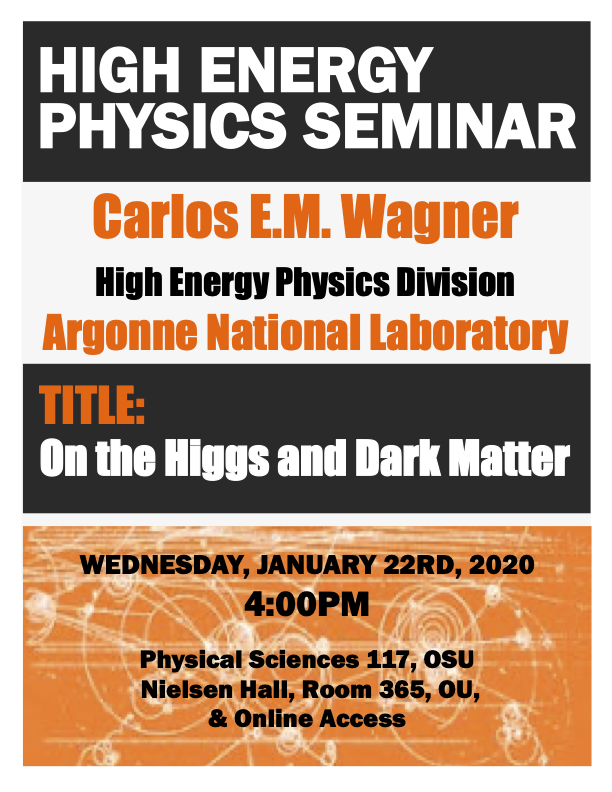 Abstract: Neutrinos are one of the most abundant of all known particles in the universe, but yet the least understood ones. A rich neutrino physics program is underway, in the US and abroad, with the goal of significantly improving our knowledge of this sector. In this colloquium I will revisit what sort of physics we expect to learn from neutrinos, and the challenges that we will need to overcome in order to do so. I will highlight the big questions in neutrino physics and the impact of future experiments in answering these.

Has MiniBooNE observed the mechanism of neutrino masses?

Abstract: In this talk I will entertain the possibility that the low energy excess observed by the MiniBooNE experiment is related to the mechanism of neutrino masses. I will review the MiniBooNE excess itself, present our proposal for a low scale neutrino mass model, and then show how these two could be connected. Abstract: Join Scarlett Ruppert, Coordinator of Employee Wellness, to learn about the multitude of fitness and wellness programs and services offered to OSU students, faculty, staff and family members. Discover the variety of options available to you right here on campus and learn how to live a healthier, happier, more productive life.

Bio: Scarlett Ruppert is the Coordinator for Employee Wellness at Oklahoma State University. She received her Bachelor’s degree in Exercise Science from Winthrop University in South Carolina. From there, she worked as an exercise physiologist before going back to school for her Master’s in Public Health at the University of North Carolina Greensboro. Scarlett has experience in personal training, group fitness, and swim instruction. She is also a National Board Certified Health and Wellness Coach where she helps individuals work toward their personal wellness goals including but not limited to physical activity, healthy eating, weight management, and mindfulness. She has several years of experience in educating a variety of populations on numerous health and wellness topics. Scarlett’s passions include educating individuals of the many benefits of adapting healthy lifestyle choices, and empowering those individuals to feel confident in making a sustainable change.

Probing leptonic scalars at the LHC

Abstract: In this talk I will show how to probe a leptonic scalar which couples exclusively to the active neutrino at the LHC. Such a scalar can be produced at hadron colliders like LHC via vector boson fusion process and lead to same-sign dilepton, two forward jets and missing transverse energy. If the scalar mass is below GeV-scale, its couplings to neutrinos are stringently constrained by the low-energy high-precision data such as those from charged meson and charged lepton decays, W and Z data, neutrino beam experiments like MINOS, light dark matter searches in NA64, and IceCube limits on neutrino self-interactions. When the scalar mass is above the GeV-scale, the projected LHC sensitivity would surpass all existing bounds. 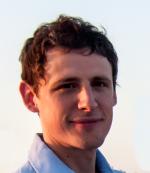 Martin Centurion
Department of Physics and Astronomy
University of Nebraska

Abstract:Many processes in nature are driven by the conversion of light into chemical and mechanical energy at the level of single molecules. After absorbing a photon, chemical bonds can be broken and new bonds made, the structure of the molecule changes, and the extra energy appears in the form of vibrations (heat). These processes often take place on femtosecond timescales, and are thus hard to observe. In this talk, I will describe recent advances in our ability to capture these changes as they happen, on the relevant timescales and with atomic spatial resolution using ultrafast electron diffraction.  We will focus on a few exemplary reactions were we have imaged the motion of nuclear wavepackets during bond breaking and structural changes, and coherent vibrations that persist in the ground state of the reaction products.

Bio: Martin Centurion is the Susan J. Rosowski Associate Professor of Physics and Astronomy at the University of Nebraska – Lincoln. He received his BS in Physics with highest distinction from the University of Michigan – Ann Arbor in the year 2000, and his PhD from Caltech in 2005 in the group of Prof. Demetri Psaltis. He was a Postdoctoral Scholar in the Center for the Physics of Information at Caltech for a year, and then from 2006-2009 he was an Alexander von Humboldt Postdoctoral Research Fellow at the Max Planck Institute of Quantum Optics in Garching, Germany. In 2009, he joined the University of Nebraska – Lincoln as an Assistant Professor. 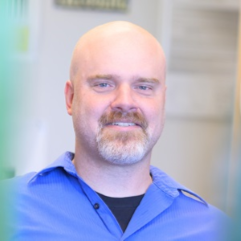 Abstract: NASA recently selected the Dragonfly quadcopter, on which I serve as Deputy Principal Investigator, as the fourth mission in its New Frontiers program of planetary missions. Dragonfly will land on the surface of Saturn's hazy moon Titan to explore prebiotic chemistry, to evaluate its habitability, and look for chemical biosignatures.  Titan is one of just 4 planetary bodies that has both a thick atmosphere and a solid surface -- Venus, Earth, and Mars are the others.  Among these, only Titan and Earth have active hydrological cycles with clouds, rain, and surface lakes and seas, though Titan's contain methane and ethane instead of water.  I will discuss the present state of our knowledge about Titan's geology, chemistry, and meteorology, as well as discussion the Dragonfly mission and how it will answer outstanding questions.  (1) How far has prebiotic chemistry progressed toward life?  (2) What potentially habitable biomes might Titan possess, both with respect to water-based life and methane/ethane-based "life, but not as we know it"?  And (3) is there chemical evidence for past or extant life on Titan?

Bio:  Barnes studies the physics of planets and planetary systems. He uses NASA spacecraft data to study planets that orbit stars other than the Sun and the composition and nature of the surface of Saturn's moon Titan. He is deputy principal investigator on the Dragonfly mission proposal to NASA, which would send a robotic rotorcraft lander to explore Titan.  He received his BS degree from Caltech in Astronomy in 1998, and his PhD from the University of Arizona in Planetary Science in 2004.  He has been a Professor of Physics at the University of Idaho since 2008. 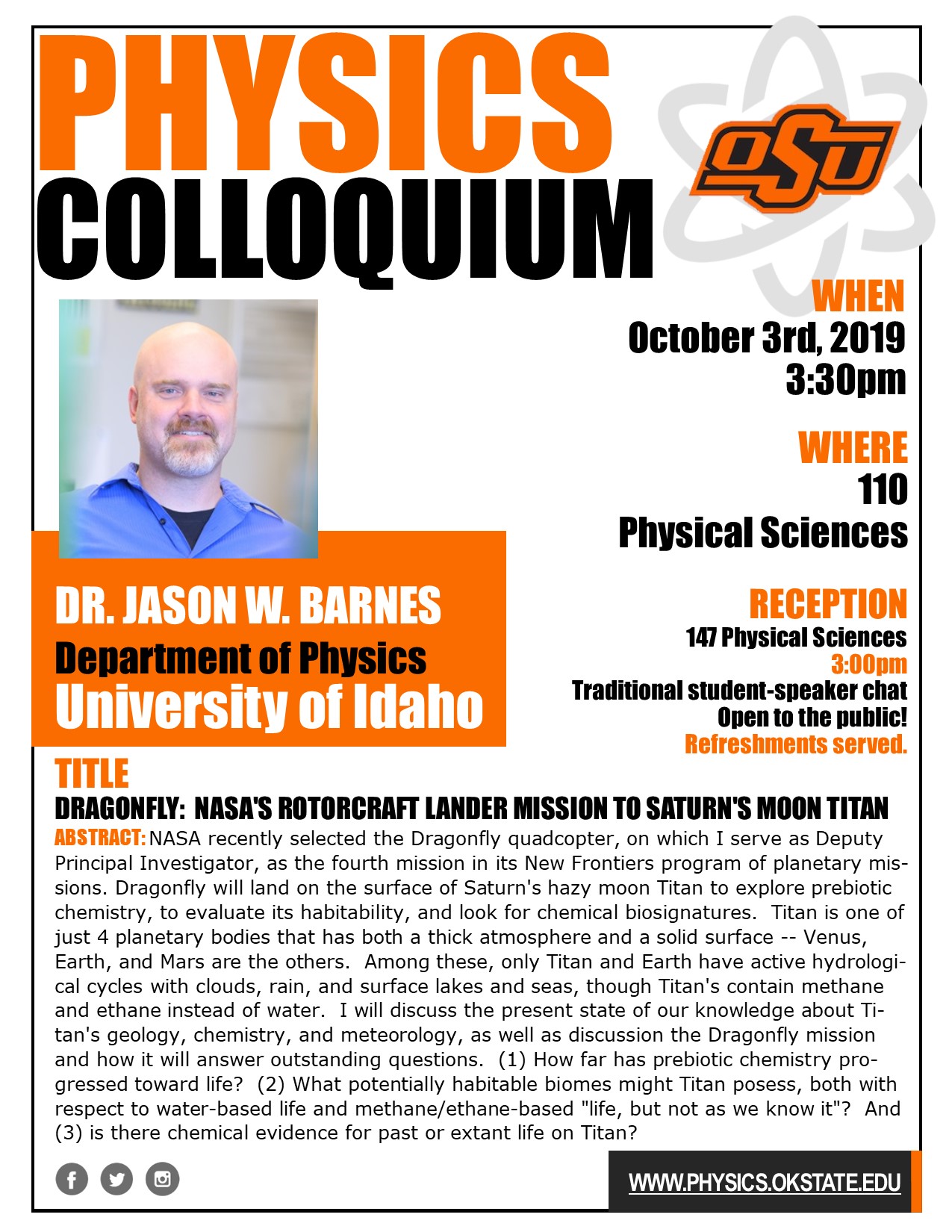 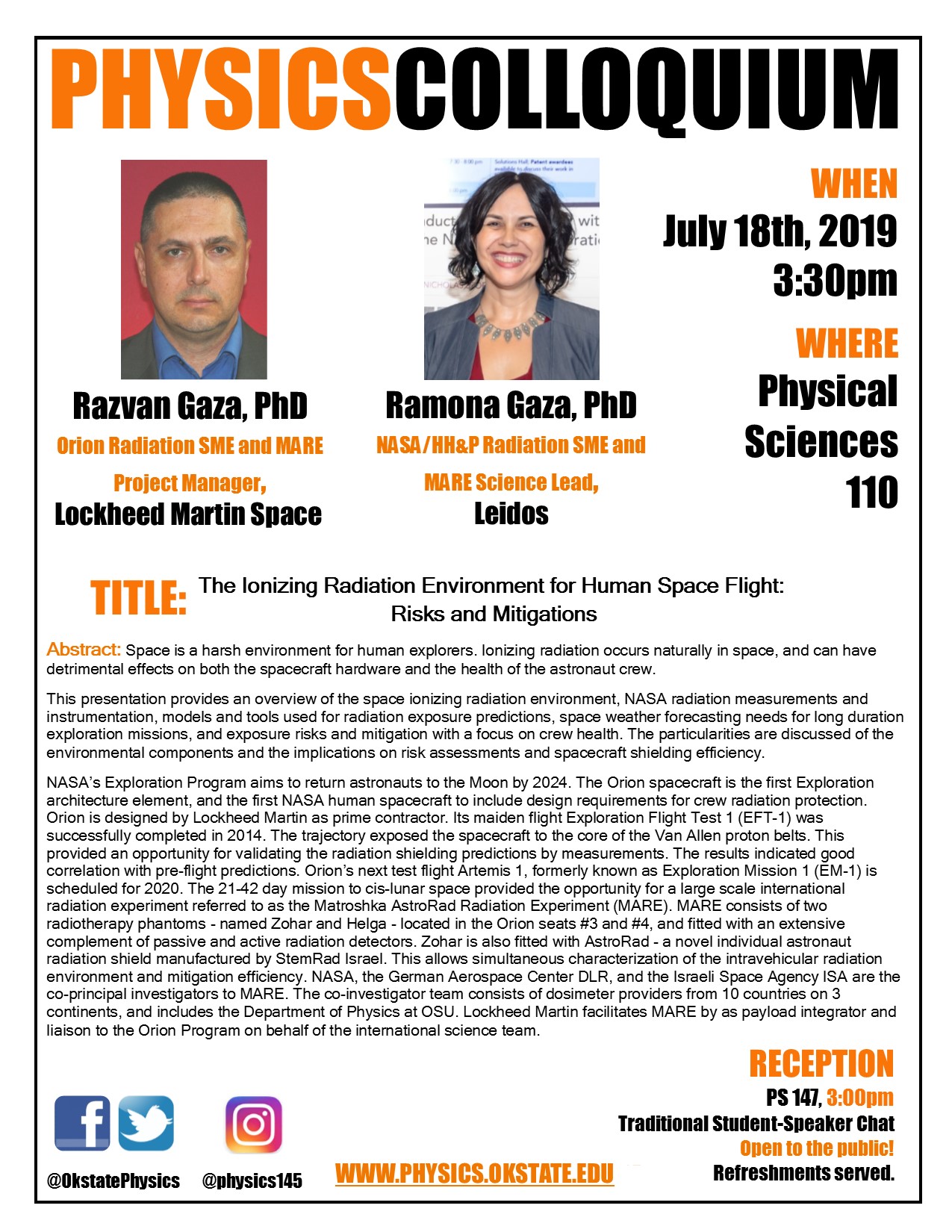 Space is a harsh environment for human explorers. Ionizing radiation occurs naturally in space, and can have detrimental effects on both the spacecraft hardware and the health of the astronaut crew.

This presentation provides an overview of the space ionizing radiation environment, NASA radiation measurements and instrumentation, models and tools used for radiation exposure predictions, space weather forecasting needs for long duration exploration missions, and exposure risks and mitigation with a focus on crew health. The particularities are discussed of the environmental components and the implications on risk assessments and spacecraft shielding efficiency.

NASA’s Exploration Program aims to return astronauts to the Moon by 2024. The Orion spacecraft is the first Exploration architecture element, and the first NASA human spacecraft to include design requirements for crew radiation protection. Orion is designed by Lockheed Martin as prime contractor. Its maiden flight Exploration Flight Test 1 (EFT-1) was successfully completed in 2014. The trajectory exposed the spacecraft to the core of the Van Allen proton belts. This provided an opportunity for validating the radiation shielding predictions by measurements. The results indicated good correlation with pre-flight predictions. Orionâ€™s next test flight Artemis 1, formerly known as Exploration Mission 1 (EM-1) is scheduled for 2020. The 21-42 day mission to cis-lunar space provided the opportunity for a large scale international radiation experiment referred to as the Matroshka AstroRad Radiation Experiment (MARE). MARE consists of two radiotherapy phantoms—named Zohar and Helga—located in the Orion seats #3 and #4, and fitted with an extensive complement of passive and active radiation detectors. Zohar is also fitted with AstroRad—a novel individual astronaut radiation shield manufactured by StemRad Israel. This allows simultaneous characterization of the intravehicular radiation environment and mitigation efficiency. NASA, the German Aerospace Center DLR, and the Israeli Space Agency ISA are the co-principal investigators to MARE. The co-investigator team consists of dosimeter providers from 10 countries on 3 continents, and includes the Department of Physics at OSU. Lockheed Martin facilitates MARE by as payload integrator and liaison to the Orion Program on behalf of the international science team.

Note: The traditional student-speaker chat will begin in Physical Sciences Room 147 at 3:00 PM. All students are welcome! Refreshments will be served.