Oklahoma State University's observatory is situated under dark skies southwest of Stillwater, Oklahoma. Pictured above are its grounds, dome, control building, and telescope, which is the largest and most advanced telescope within 300 miles.

The 24-inch telescope was designed and instrumented for astrometry, photometry, and multicolor imaging of objects such as near-Earth asteroids, transiting exoplanets, and quasars. Visit the 24-inch Telescope Gallery to view the first test images made with it.

Additionally, the observatory's portable, 8- and 14-inch telescopes are perfect for visual observing, especially by OSU's introductory astronomy students. Work done by physics and engineering majors with the 14-inch telescope while it was mounted in the dome helped secure Air Force funding for the 24-inch telescope. The 14-inch Telescope Gallery shows those students and their work.

The observatory's infrastructure was funded by generous private support as well as by OSU. The observatory's layout was derived by professor Peter Shull from a conceptual design by Stanly E Black, AIA, Architect, Boston, Massachusetts. It provides ample space for outdoor viewing and future structures. 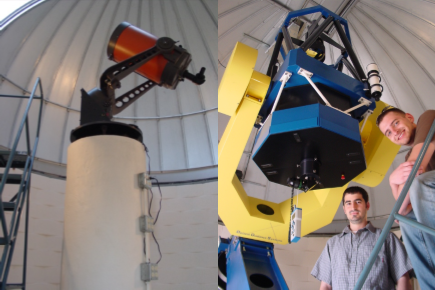 The newly built control building in 2017, and the completed facility in October 2018. The drone view is by Trace Aerial Surveying.

The heated and cooled control building contains a restroom, kitchenette, telescope control room, and equipment storeroom, which make the observatory well-suited for both research and instruction.

Recent funding through the OSU's President's Fellows program is making it possible to upgrade the main telescope's complex control system, which has been experiencing normal physical and technological ageing over the years.

The improvements will enable OSU to introduce an astronomy minor, unique in Oklahoma, that incorporates modern observatory experience. Students who minor in astronomy and major in physics, engineering, or related fields will be ready for exciting, well-paying employment after graduation in industry, science, and defense.

If you would like to assist with future development of the observatory, please click here to make an instant donation to OSU Foundation account 22-40400, or contact our department head, Dr. Flera Rizatdinova, and the OSU Foundation.

Click here to see the observatory on YouTube. This 6-minute video includes action shots of the telescope and dome, and interviews featuring OSU's president and two undergraduates.

The observatory also appears in the five-part series titled "Wonders of the Solar System" produced by the British Broadcasting Corporation (BBC). The observatory appears in the second episode, "Order out of Chaos". The series premiered in the UK and USA, and is available on DVD. To see photos of the BBC's visit to Stillwater, click here. 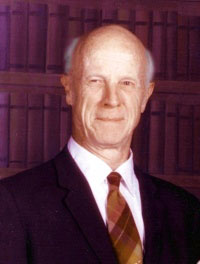 Dr. Mendenhall earned his Ph.D. in astrophysics at the University of California at Berkeley, and served on OSU's faculty as a professor of mathematics and astronomy from 1937 until his retirement in 1968. During World War II, he taught navigation to countless air cadets as a lieutenant and captain in the U.S. Army Air Corps. Dr. Mendenhall died on March 20, 2000, at the age of 97. 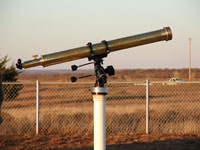 This photograph shows Dr. Mendenhall's personal telescope, a 4-inch refractor built in the early 1890's, set up on the central observing pad.