These images and videos were made by undergraduates in OSU's Observatory Research course with the observatory's 14-inch telescope, which was in service from 2002 through 2006.

Unless otherwise noted, objects are oriented as they appear in the sky (north is up, and east is to the left). Dates and times are expressed in Universal Time (UT), which is essentially the time standard in London, 6 hours ahead of Central Standard Time. 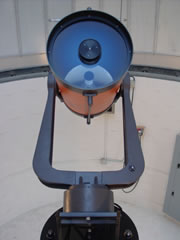 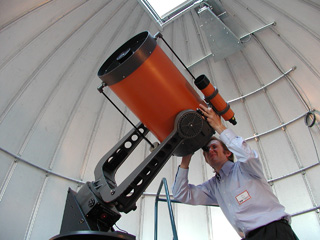 Here are two views of the telescope, 14 inches in diameter and of Schmidt-Cassegrain optical design. It was in service from 2002 through 2006. The front view shows the Schmidt corrector plate with secondary mirror and, at the back, the primary mirror and tubular light baffle.

Sensitive, electronic (CCD) camera systems were connected to this telescope to obtain still and video imaging through filters of various colors. Images could be calibrated, measured, and converted into full-color images or digital movies with the computers in the observatory's image-analysis laboratory on campus.

This telescope was acquired for OSU circa 1980 through the efforts of Professor Leon W. Schroeder. Dr. Schroeder, OSU's second astronomer, earned his Ph.D. in astrophysics from Indiana University in 1958, and taught physics at OSU from 1951 until his retirement in 1984. During World War II he interrupted his undergraduate studies at Oklahoma A&M College to teach flying at the No. 3 British Flying Training School in Miami, Oklahoma. He died March 1, 1995.

The Moon on 2005 March 20 at 4:48 UT. This is a color close-up of the southern edge of the waxing gibbous Moon, with the terminator (shadow line) to the left. The newest craters have the sharpest edges. View the original image: moon-original.jpg.

Two images of Mars, 2003 September 6, about 4:50 UT. Longitude of the central meridian is near 315 degrees. Each image is made from a different set of several hundred video frames obtained with the CCD videocamera. View the original images: mars_adj1_mm-original.jpg and RGBmars2_jw-original.jpg.

Mars, 2003 September 6, about 0700 UT. Longitude of the central meridian is near 340 degrees. Even though this is near the date of its closest approach on 2003 August 27 UT, the planet's disk is just 20 camera pixels across.

Jupiter, 2005 April 5, about 3:10 UT. It consists mostly of liquid hydrogren and helium, but its gaseous outer layers display dark belts and light zones.

Saturn, 2005 April 1, about 3:40 UT. The rings are near their maximum angle of tilt, and the planet's shadow on the rings is evident.

The Crab Nebula, 2004 April 17. This supernova remnant, including the central pulsar, is all that remains of a massive star that exploded in 1054 AD. View the original image: Crab4-original.jpg.

The Dumbbell Nebula, 2004 November 8. This is a planetary nebula, produced by a sunlike star near the end of its life. The star's outer layers are cast off into space, and made to glow by ultraviolet light from the central white dwarf, all that remains of the original star. View the original image: Dumbbell_Nebula_m27true3flip-original.jpg.

The Ring Nebula, 2004 November 8. This is another planetary nebula, and you can also see its central white dwarf "star". It is about 2000 light years away, roughly twice as far as the Dumbbell Nebula. View the original image: Ring_Nebula_M57crop-original.jpg.

The Andromeda Galaxy, 2004 October 17. This spiral galaxy is 2-3 million light years away. The original image, about 0.35 degrees wide, shows only the galaxy's central region, the intensely bright nucleus which contains a black hole of 30 million solar masses. View the original image: M31-original.jpg.