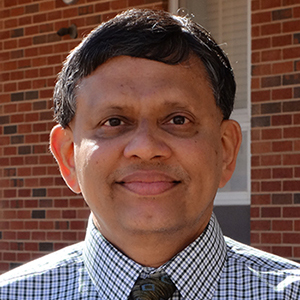 K. S. Babu is a theoretical physicist and regents professor of the Department of Physics at Oklahoma State University. Earlier, he was interim head of the Department of Physics at Oklahoma State University. He received his PhD in 1986 from the University of Hawaii, under the supervision of Ernest Ma. He is one of three theoretical physicists named as a 2017 Distinguished Scholar by the Fermi National Accelerator Laboratory, or Fermilab, the largest particle accelerator facility in the United States. He has been appointed by the American Physical Society to lead the selection committee for the J.J. Sakurai Prize in Theoretical Particle Physics. He will serve as the Vice Chair of the Committee this year, which will consist of prominent physicists Zoltan Ligeti (Chair, Berkeley), Lisa Randall (Harvard), Nima Arkani-Hamed (Princeton IAS) and Carlos Wagner (Chicago). After serving a year as the Vice Chair, Babu will become the Chair of the Committee next year. The J.J. Sakurai Prize is the highest recognition awarded by the American Physical Society in the field of theoretical particle physics. Eight previous recipients of this award have gone on to win the Nobel Prize in physics.

Babu's research interests are primarily in the model-building and phenomenological aspects of physics beyond the Standard Model. He has been involved in studies of grand unified theories and nucleon decay. Babu is a key member of the neutrino theory community, having proposed several testable models of neutrino masses. His 1988 paper on two-loop generation of neutrino masses (the so-called Zee–Babu model) provides an alternative to high scale seesaw mechanism, and is well cited in the literature. He and Ed Kearns convened the Baryon Number Violation subgroup of the "Snowmass" 2013 Community Planning Study. He has helped organize the Center for Theoretical Underground Physics (CETUP) series of international conferences on neutrino physics in Lead, South Dakota.