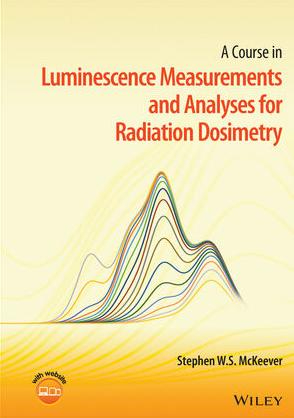 Description: A complete approach to the three key techniques in luminescence dosimetry In A Course in Luminescence Measurements and Analyses for Radiation Dosimetry, expert researcher Stephen McKeever delivers a holistic and comprehensive exploration of the three main luminescence techniques used in radiation dosimetry: thermoluminescence, optically stimulated luminescence, and radiophotoluminescence. The author demonstrates how the three techniques are related to one another and how they compare to each other. Throughout, the author’s focus is on pedagogy, including state-of-the-art research only where it is relevant to demonstrate a key principle or where it reveals a critical insight into physical mechanisms. The primary purpose of the book is to teach beginning researchers about the three aforementioned techniques, their similarities and distinctions, and their applications. A Course in Luminescence Measurements and Analyses for Radiation Dosimetry offers access to a companion website that includes original data sets and problems to be solved by the reader. The book also includes: • A thorough introduction to the field of luminescence applications in radiation dosimetry, including a history of the subject. • Comprehensive explorations of introductory models and kinetics, including the concepts of thermoluminescence, optically stimulated luminescence, and radiophotoluminescence.• Practical discussions of luminescence curve shapes, including the determination of trapping parameters from experimental thermoluminescence and optically stimulated luminescence data. • In-depth examinations of dose-response functions, superlinearity, supralinearity, and sublinearity, as well as the causes of nonlinearity. • Detailed examples with well-known materials. A Course in Luminescence Measurements and Analyses for Radiation Dosimetry is an invaluable guide for undergraduate and graduate students in the field of radiation dosimetry, as well as faculty and professionals in the field.

Click here to purchase  "A Course in Luminescence Measurements and Analyses for Radiation Dosimetry."

Stephen McKeever is Emeritus Regents Professor of Physics at Oklahoma State University. He is the former Oklahoma Secretary for Science and Technology (2011-2017), and the former Vice President for Research and Technology Transfer at Oklahoma State University (2003-2013). As Secretary of Science & Technology he served on the Governor’s Cabinet and was Chairman of the Governor’s Science & Technology Council and UAS Advisory Council. He also sits on numerous Boards and has served on several national scientific committees.
He obtained his PhD and DSc from the University of Wales and after postdoctoral work at the universities of Birmingham and Sussex in the UK he joined the OSU physics faculty in 1983, attained the rank of Associate Professor in 1986 and Full Professor in 1990. He was named a Noble Research Fellow in Optical Materials in 1987, served as head of the Department of Physics from 1995-99, and Associate Dean for Research in the College of Arts & Sciences from 2000-03. Dr. McKeever was named the MOST (More Oklahoma Science and Technology) Chair of Experimental Physics in 1999.
He has authored or co-authored over 200 scientific publications and 6 books, and has 6 US and 9 International patents in the area of radiation detection and measurements, specializing in development and applications of luminescence in radiation dosimetry. He is a Fellow of the American Physical Society, a Fellow of the Institute of Physics, a Fellow of the National Academy of Inventors, and a Member of the Health Physics Society. He has also served co-Editor-in-Chief and is presently Consulting Editor of the journal Radiation Measurements.

For the entire list of Dr. McKeever's publications visit: https://physics.okstate.edu/people/emertitus-faculty-directory/441-bio-mckeever