The OSU high energy physics experimenters took a break from their busy schedule of searching for new particles at the Large Hadron Collider in Geneva (and occasionally finding one, as in the case of the Higgs boson in 2012) to immerse themselves in conveying the excitement of research to Oklahoma high school teachers.

Drs. Flera Rizatdinova, Joseph Haley and Alexander Khanov were at it again this summer, when a group of 19 high school teachers spent a week at OSU learning about cutting-edge research and gaining hands-on experience in making affordable "cloud chambers" that can detect charged particles.

The QuarkNet program, headed by Dr. Rizatdinova, and supported by a grant from the National Science Foundation, held the annual workshop at OSU in June with participation by teachers from all over Oklahoma. Dr. Haley played an important role in all organizational matters, with invaluable support from the physics office staff. The workshop focused mainly on two topics: principles of the detection of particles at the Large Hadron Collider (LHC) and gravitational wave detection. Dr. Michael Strauss from OU was also available to lend a helping hand. This group prepared a series of lectures on particle detectors and on the Higgs boson, and addressed questions related to the LHC. In addition, Dr. Eric Benton, from the radiation physics group, introduced the Geiger counter and explained its principles and its applications in everyday life. The teachers had an opportunity to make measurements with these counters. They learned first-hand about ongoing research in Dr. Benton's lab, as well as in the optics labs of Drs. Yingmei Liu and Gil Summy, where they were exposed to Bose-Einstein condensates. Our graduate students, Oliver Causey, Aaron Braly, Jiating Ni and Zihe Chen, did a great job serving as the tour-guides for these laboratories.

One particular hands-on activity seemed to intrigue the school teachers. They made their own cloud chambers with relatively cheap kits bought through QuarkNet funds. The teachers were pleasantly surprised when they learned that they could take these cloud chambers back to their classrooms. 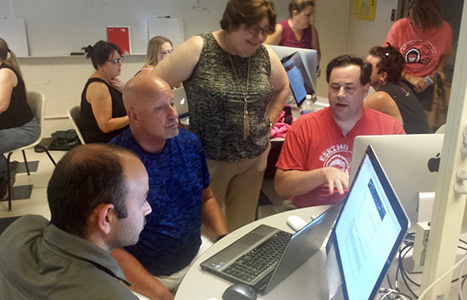 The second half of the workshop opened with a presentation by Dr. Peter Shull on the theory of gravitational waves. Rick Dower, a Quarknet Leadership Fellow, came to OSU to talk at length about the recent discovery of the gravitational waves made by the LIGO experiment. This discovery has gained world-wide attention as one remarkable proof of Einstein's general theory of relativity. The teachers also had a chance to analyze seismic data collected by the LIGO experiment. Following the analyzation, the teachers had a videoconference with scientist from LIGO headquarters in Hanford, Washington. During this call the teachers were able to ask the scientists questions.

In-depth discussions on teaching methods, current situation with K-12 education in Oklahoma, and strengthening connections between high school science teachers and OSU faculty occurred during the workshop. At the end of the workshop, Dr. Haley and Dr. Rizatdinova presented QuarkNet certificates to all teachers. It was indeed an exciting week for all involved. Well done folks!