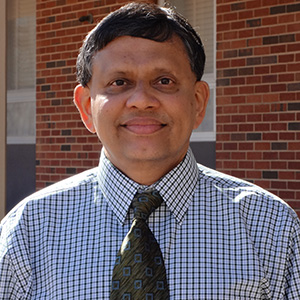 Dr. Kaladi Babu, interim head of the Department of Physics at Oklahoma State University, has been named a distinguished scholar by the country's largest and most prominent particle physics laboratories.

Babu is one of three theoretical physicists named as a 2017 Distinguished Scholar by the Fermi National Accelerator Laboratory, or Fermilab, the largest particle accelerator facility in the U.S.

"I am thrilled about being recognized as a Fermilab Distinguished Scholar and the opportunity it provides to engage in research on the national scene at Fermilab," said Babu, a Regents Professor of Physics at OSU.

The two-year appointment gives Babu an affiliation with Fermilab, along with the same research opportunities and support afforded its own scientists. It is the second year for the program, launched by Fermilab in 2016 with the selection of four scientists at U.S. universities.

In addition to spending at least four weeks a year at Fermilab's facility in Illinois, Babu will be able to bring two students or postdocs to work alongside some of the brightest minds in theoretical particle physics.

"This will enable my group to showcase its research done here at OSU, and also help initiate research collaborations with renowned scientists," said Babu. "More significantly, it will provide my students a great opportunity to spend time at Fermilab and be exposed to research at the highest level. I am especially thrilled about exploring new ideas in neutrino physics, where Fermilab is set to be the world leader, and where I have some expertise."

Fermilab was founded in 1967 on the site of the former town of Weston, Ill., near the community of Batavia. Named in honor of Enrico Fermi, the Italian physicist who created the first nuclear reactor, Fermilab is currently directed by Nigel Lockyer.

"A major goal of the program is to strengthen connections between the Fermilab Theoretical Physics and Astrophysics groups and the wider U.S. particle-theory community," said Lockyer in a release. "It also aims to increase resident theoretical expertise in targeted physics areas to support the Fermilab experimental program."